Coco Shows How Important Family is 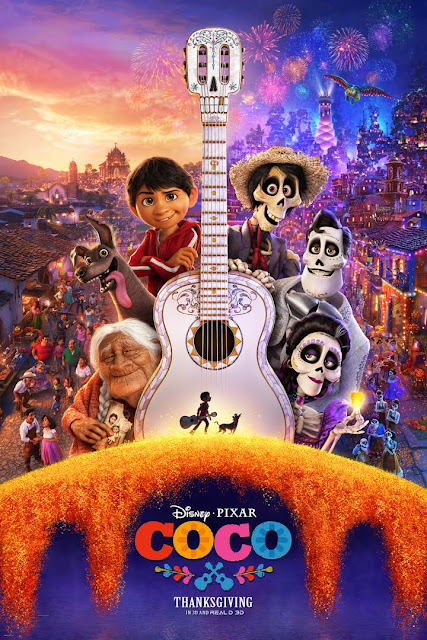 I watched this a month after it first premiere. And watched it twice. I love animation movies. Doesn't mean that it is childish but sometimes there is even good moral value behind it. Besides, you don't need to think too much while you are watching it. Always in a funny entertaining package.

So Coco also show us some Mexican culture where the day of the dead (Dia de los muertos) that held every year is the important day for them. It is a day where your dead ancestor are going back for one day to the living world. Temporarily, they believe that dead ancestor will be happy if we serve their favorite foods and what they like at home. They also put the photos at ofrenda (kind of altar or a special place to remember the dead ancestor).

This is interesting, in the land of dead, they can be dead for the last time if there is no one in the land of living remember their existence. So Coco's father left her and mother to sing for the world. His name is Hector and his ambitious friend is De La Cruz. The day Hector decided to come home for Coco, de la cruz poisoned him and stole his musics, song, and guitar. But his family never knew it and consider that he is a bad man who abandon his family.

The memory of Hector still alive in Cocos. But Coco is already too old to remember things anymore, her brain start to degenerate. The photo of her father is ripped off as there are no family want him and music is a curse for him. Until Miguel was born. Miguel is great great grand son of Hector who are inherited with the musical skills of Hector. Ok back to memory of Hector, when there is no one remember you anymore, then it means the  final death waiting for you. You will be disappear from the land of dead, you will stay there if there is someone who remember you but you cant cross the bridge to visit family in the land of living if your photo is not in ofrenda. Like Hector, he cant visit his family because his photo is ripped off in ofrenda but he can stay in the land of dead because Coco still remember him.

It is interesting because you can put the photos of 4-5 generations in ofrenda and have them back on the day of dead once a year. And you have to keep telling the story of them to family so their memories will keep alive.

Miguel accidentally came to the land of the dead. And the only way to go back is only by having the blessing of the dead family (although family can add more conditions to it). Mama Imelda is the wife of Hector and hate him so much, and put condition to Miguel for her blessing, not to play music at all. But Miguel cant keep it so he start to take the guitar once he is back to living land, and then straightly back to land of dead because he played music.

Singkat cerita, Miguel didn't know that Hector is actually his great great grandpa. He thought that de la cruz is, because of the guitar is the same as in ripped photo in ofrenda. Hector help Miguel to get de la cruz blessing (since he thought that he is one of family there), and Miguel is asked to put Hector photo in ofrenda once he is back. They deal with it but long story short, they found out that de la cruz is killing Hector and Hector is Miguel's great great grandpa because Hector told him that he want to go back for the last time for her daughter, Coco.

Family reunion happen. There is a fight between them and de la cruz as he has the only one photo of Hector that is meant to put in ofrenda, but the photo is gone. Miguel has to come back to the land of living before sunrise. But Hector is dying. So Imelda and Hector give their blessing and say 'Miguel, I give you my blessing to come back, and put your important family first' (kurang lebih begitu lah). They didn't give conditions but they asked him to think about family first because family is important.

He is back and run to Coco try to make her memories of Hector alive again. It doesnt really work since her brain is kinda old. Then he sing a song to Coco, Remember me. Hector made this song for Coco and sang it every night for her. Until de la cruz stole it. Surprisingly Coco following Miguel to sing and then she told everyone about her father. She also kept the part of photo that is ripped. Then they put the photo there in ofrenda. Now they have a complete photo of ancestor.

It is actually simple, you need to put your family first. But it is so touching in some scenes. And it is show you some Mexican culture that is recognize by UNESCO, Dia de los muertos. They speak Spanglish. Put some Spain in their conversation. And their voice is just good. My favorite song is Un Poco Loco and Remember me (lullaby ver of Hector and little Coco singing). My favorite one is Hector 💙